Last night I had supper with Alan Uhl and Pat Dalton (pictured in red) at Zarda's BBQ restaurant in Lenexa, Kansas. 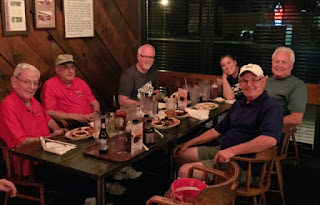 They are the two gentlemen who, in 1982, started The Great Lenexa Barbeque Battle, The Kansas State Championship.
That last part "The Kansas State Championship" is unique.  You might be tempted to wonder what's so unique about being a state bbq championship.  Afterall, a quick look at The Kansas City Barbeque Society event calendar lists 19 states with 'STATE CHAMPIONSHIPS' in the month of October alone.
So what's the big deal about Lenexa being The Kansas State BBQ Championship?  The big deal is that it was the first.  I don't mean the first in Kansas.  I mean the first.  As in FIRST IN AMERICA.  That first state championship was held on June 29-30, 1984 and 48 teams competed.
Kansas Governor John Carlin issued and signed the proclamation declaring Lenexa the state championship.  He signed it on April 27, 1984.  Here is the key phrase "...and designate this barbeque battle as the official barbeque contest of the State of Kansas, and its grand champion to be the Kansas State Champion Barbeque Chef."
Today, in 2016, nearly 200 teams compete at Lenexa.  And it is hard to win there.  No team has ever gone back to back.  Hoelting Brothers BBQ went 1st, 2nd, 1st in 1991-93.  Almost the trifecta.
To solidify the State Championship prestige of winning, Lenexa awards a championship banner.  The banner is just like the ones that hang in high school gymnasiums all across America proclaiming State Championships in Volleyball, Basketball, Football, Track etc.
QUE IT UP, Lenexa!  You started something great, others recognized it and all enjoy competing for it.  Thank you.