Fun and Wisdom from the Underlined Page 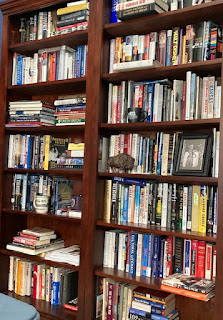 For years I have underlined book excerpts, written notes in book margins and noted page numbers on fly-leafs so that I can return to book passages that struck me as fun or full of wisdom.  Today, I begin to share some of them.  Please enjoy...........................

"Aren't we adding an impossible load on our audience when we ask them to listen intently to our words and read a lengthy PowerPoint slide at the same time?  They can't do both!"

From 'Talk Like TED' by Carmine Gallo, advocating pictures rather than words on slides

"At least on paper, Jim Crow was over."

From 'These Truths' by Jill Lepore when writing about the 'Brown v. Board' decision

"So the coach had credibility when demanding maximum effort.  His 2001 team was 3-4 when he handed the players a sheet that, among other things, explained how a 99.9 percent effort by the United States Post Office and the airline industry would result in 400,000 lost letters and 18 plane crashes every day."

From 'Belichick' by Ian O'Connor when writing about Bill Belichick

"...don't value planning for its results: the plan.  The greatest value of the plan is the process, the thinking that went into it."

From 'Selling the Invisible' by Harry Beckwith

"...so there are particular moments in public affairs when the people, stimulated by some irregular passion, or some illicit advantage, or misled by the artful misrepresentations of interested men, may call for measures which they themselves will afterwards be most ready to lament and condemn.  In these critical moments, how salutary will be the interference of some temperate and respectable body of citizens, in order to check the misguided career and to suspend the blow meditated by the people against themselves, until reason, justice, and truth can regain their authority over the public mind?"

"It is reassuring to remember that paranoiacs have always been with us, but have never defined us."

From 'The Woven Figure' by George Will, in a compilation of his columns and writings

"The great thing about space exploration is that we don't know what its payoff will be.  This symbolizes the American civilization.  The people who settled America had no idea what the payoff would be.  They settled it before they explored it."

From 'One Giant Leap' by Charles Fishman as he quotes Daniel J. Boorstin

"He was not the only player who thought the old system stank, but he was the only one with the credibility, cachet, and audacity to act out his frustrations and get away with it.  He was also candid about his motivation: it was less about democracy than capitalism.  'When the green's floating around,' he said, 'make sure you get your share."

"With the assistance of other friends in Iowa City and then in Chicago, he secured uninspected boxcars in which the slave stealers and stolen slaves traveled the final five hundred miles of their odyssey together.  On March 12, he and Kagi, who had joined the procession en route, stood on the dock in Detroit and watched the Canada ferry recede on the horizon, carrying those they had brought out of bondage.  In fact, it carried one more.  Mrs. Daniels had been seven months pregnant at the time of her rescue.  During the journey she safely delivered a son and named him John Brown."

From 'Patriotic Treason, John Brown and the Soul of America' by Evan Carton

"I wish to obtain such papers as the Smithsonian Institution has published on this subject, and if possible a list of other works in print in the English language.  I am an enthusiast, but not a crank in the sense that I have some pet theories as to the proper construction of a flying machine.  I wish to avail myself of all that is already known and then if possible add my mite to help on the future worker who will attain final success."

"People are often surprised to hear that Olympic coaches aren't awarded medals, but they aren't.  So a dozen NBA stars put their gold medals around the college guy's neck and posed with him for a snapshot.  Mike Krzyzewski was beaming in the photo, and for good reason.  'This has been the greatest experience of my life,' he said."

From 'Coach K' by Ian O'Connor

"He and others had come up with a plan to regain control of the airplane over a rural area.  'No,' Deena admonished him. 'Sit down, be still, be quiet, and don't draw attention to yourself.'

'If they're going to crash this plane into the ground, we're going to have to do something,' Tom said.  There was no time to wait for the authorities.  What could they do anyway? 'It's up to us,' he said.  'I think we can do it.'

Deena sent her kids to school and held the phone, thinking Tom would call again and say everything was okay.  She had every confidence that he would march into the cockpit and fly that airplane.  In the fright-hope of the moment, she did not allow herself to think otherwise."

"Lincoln told Speed that, thanks to the Emancipation Proclamation, he would be remembered.  But he would never have been able to issue the proclamation (or defend the Union) if he had not won elections, united a party, made his case.  He did it by hard work and dirty work: watching for opportunities, stroking egos, greasing wheels, all the backroom deals and open maneuvers of politics."

From 'Founders' Son' by Richard Brookhiser

"But for Vaux (and presumably for the absent Olmsted) such monumental architectural flourishes contradicted the conception of Central Park as a pastoral retreat from the city."

"The truth, Bannon said, was that Trump really had no core belief except for advancing himself and making money."

From 'Ticking Clock, behind the scenes at 60 MINUTES' by Ira Rosen

"Kansas City's Laugh-O-Gram Films studio (the McConahy Building) is being restored.  But public support and a little Disney magic are needed so the nonprofit, Thank You, Walt Disney, Inc., may one day showcase how Disney's world of Hollywood animation was first 'sketched' in Kansas City."

"One of Hal's favorite sayings was, Play the next play.  The words were a combination pep talk and theory of life, perfectly aligned with his coaching philosophy.  The gist was, life, like football, is a headlong dive into the future.  There is no past, at least not one you should worry too much about.  If you lose, let it go.  Don't panic.  If you win, don't be too satisfied.  Play the next play."

From 'The Perfect Pass' by S.C. Gwynne

"And why spend so much on a bombsight?  Because the Norden represented a dream--one of the most powerful dreams in the history of warfare: if we could drop bombs into pickle barrels from thirty thousand feet, we wouldn't need armies anymore.  We wouldn't need to leave young men dead on battlefields or lay waste to entire cities.  We could reinvent war.  Make it precise and quick and almost bloodless.  Almost."

From 'The Bomber Mafia' by Malcolm Gladwell

"...When you cover a punt return of an explosive player, you always break down.  You never take a shot at him.  You just slow him down, make sure you have help, and then attack him.  I didn't do that, because I wanted to brag to him the next week about how I slammed him.  I was the first guy down on that punt return, and I got my hands on him, but I couldn't hold him.  And I held him just enough for three guys to miss him...."

"The city that never sleeps was going to sleep even less, with parties everywhere to usher in 1971.  There was much to celebrate and much to plan.  The fight of the century does not come along every year."

"You can either admire the wonder of evolution and the wonder of the price system as proof that the world works fine without anyone being in charge in the fullest sense of that phrase, or you can be grateful to God for embedding such wonders in our world."

From 'The Price of Everything' by Russell Roberts

"It was fitting that the team owned by the AFL's founder represented the league in its final game, and to Lamar, it was also fitting that the Vikings were the opponent.  Lamar would never forget Minnesota's owners, led by Max Winter, signing on with the AFL only to jump to the NFL when Halas offered them a franchise.  Their about-face had devastated the AFL, leaving bitter feelings.  A matchup between the Chiefs and Vikings was a fitting conclusion to the AFL-NFL war."

From 'Ten-Gallon War: The NFL's Cowboys, the AFL's Texans, and the Feud for Dallas's Pro Football Future' by John Eisenberg

"For them, war was not an exciting adventure but the cold, cruel, inescapable business of life.  The Boer 'went out in a businesslike way to kill men,' Amery wrote, 'as he would to kill dangerous wild beasts, and he saw no more glory in dying at an enemy's hand than in being eaten by a lion.'"

From 'Hero of the Empire: The Boer War, a Daring Escape, and the Making of Winston Churchill' by Candice Millard

"As Bill James, the godfather of the statistical analysis revolution, once famously said after writing an essay on Rickey, "If you split Rickey Henderson in half, you'd have two Hall of Famers."

From 'Rickey' by Howard Bryant

"Charlie Parker, no matter how highly talented, was not greater than his idiom.  But his work helped to lead the art form to its most penetrating achievement.  Jazz, as a performing art, is about navigating a landscape in which spontaneous creation whizzes by in layered stacks, and about creating a fresh and continual response to that landscape.  The music is about more than merely making something up; as drummer Max Roach often said of playing jazz, it is about creating, maintaining, and developing a design."

From 'Kansas City Lightning: The Rise and Times of Charlie Parker' by Stanley Crouch

"Why did Paul Hornung place bets on the Packers and endanger Lombardi's awesome team?  The answers are as complex and varying as human nature itself.  Hubris.  A sense of invincibility.  Reckless youth.  Thrill of winning.  Peer pressure.  Boredom.  Temptation."

From 'When Pride Still Mattered'  by David Mariness

"The Kansas City area is home to two of the top four barbecue contests in the world:  the American Royal Barbecue and the Great Lenexa Barbeque Battle Kansas State Championship.  That's like having Wimbledon and the U.S. Open tennis tournaments in the same city every year.  If that were the case, wouldn't you say that city has a right to call itself the Tennis Capital of the World?"

From 'The Grand Barbecue' by Doug Worgul

"Favoring the movement was the Lawrence Republican, now edited by Dwight Thacher and his brother Solon.  Their first editorial on the idea, appearing January 20, stated that it was not leaders who would make a Republican Party but 'the ideas which inform the party and constitute its basis."

"The distance between these years and the present is the measure of how entirely the American voting public now takes these kinds of political shenanigans for granted.  The machinery of every American political campaign above the level of dogcatcher is now run by companies like the Simulmatics Corporation using algorithms that are the great-grandchildren of the code written by Bill McPhee for the People Machine in 1959.  Mouth agape and breath more or less bated is not how Americans view the ordinary undertakings of the thousands of data and analytics firms that advise American political campaigns in the early decades of the twenty-first century.  Hardly anyone even notices them.  But in 1961, editorial writes who followed this story found it scandalous."

From 'If Then' by Jill Lapore